In this David Zucker An American Carol, a Michael Moore-like filmmaker (Kevin Farley) is the story’s Scrooge who, out of deep disgust with American foreign policy, resolves to try to get the Fourth of July legally banned. 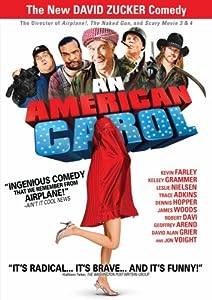 Cover of An American Carol

It is Zucker’s aim to make us laugh–and he does. “Carol” is all madcap hilarity.

Too, it’s his aim to devastate the hard Left–and he does. Except for “Team America,” I’ve never seen a comedy that goes for the jugular as much as this one does.

It hits the ACLU and an endorsement of higher taxes by Jimmy Carter as hard as it does Michael Moore.

But some may understandably object that the film ignores satire’s fundamental rule of attacking the sin but sparing the sinner, i.e. Moore.

Farley’s Michael Malone is a selfish soul who gets thrown out of a window, beaned by iron bells in a graveyard, and slapped by General Patton’s patriotic ghost. Plus he wants to grope women and is indifferent to his nephew’s disabled children.

Zucker seems cruel to Moore–not sparing the sinner–except for one thing: he eases up at the end because Malone reforms. The cartoonish brutality doesn’t last.

Zucker and his co-writers are absolutely right about medical care in Cuba in an explosively funny scene involving the Cuban common people. They mock the contemporary university, esteemed by Malone, with musical super-farce.

They even demonstrate the guts to satirize radical Islamists and leave Christians alone, not quite the case with “Team America.” A caveat must be submitted, however, in that there is bawdiness.

But there is in Ezekiel 23 also, and it’s not even a chapter about sex (it’s about idolatry). A second caveat: I said “An American Carol” makes us laugh, but, well, many liberals may feel excluded from what Zucker is doing and NOT laugh.

I’m sorry about that, but conservatives have constantly felt excluded too. At any rate, this thoroughly right-wing assault makes the movie bravely, stunningly different, unique.