One Of The Few Good Movies From The ’80s: “Say Anything” 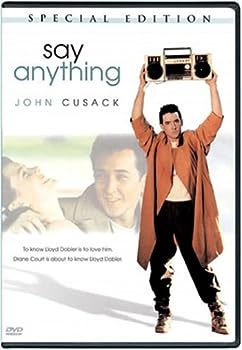 Cover of Say Anything

A love story, Say Anything (1989) has the distinction of focusing on a teenaged boyfriend (John Cusack’s Lloyd Dobler) who is a Great Guy, however unambitious.  The main proof that he’s a Great Guy is his romantic—or chivalrous—prowess—not aimed at just anyone but at the very pretty class valedictorian, Diane Court (Ione Skye).  “I’m good at it,” Lloyd says of his companionship with Diane, but the girl’s father (John Mahoney) deems Lloyd a nice mediocrity and dislikes the relationship.  Ironically, this is despite the detractor’s being in prison for accruing ill-gotten gain off a nursing home.  (How naughty some of these middle-agers are!)

The girls in the film are close to being paragons of virtue, but . . . there’s also Lloyd.  Over and above, SA is a good-hearted picture with inventive story elements and a fun, discerning cast.  A middlebrow worthy.

Written and directed by Cameron Crowe.